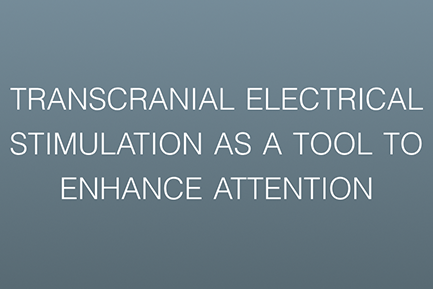 Attention is a fundamental cognitive process—without it, we would be helplessly adrift in an overload of sensory input. There is considerable interest in techniques that can be used to enhance attention, including transcranial electrical stimulation (tES).

Is transcranial electrical stimulation an effective tool to enhance attention?

We present an overview of 52 studies that have paired attention tasks with tES, mostly in the form of transcranial direct current stimulation (tDCS). A brief summary of the methods and results of the included studies is presented in the article (in Tables 1–4), clustered by the most frequently used types of tasks: visual search, spatial orienting (e.g., Posner cueing tasks), spatial bias (e.g., line bisection tasks), and sustained attention.

Some promising results have been reported in each of these domains. However, drawing general conclusions about the efficacy of tES is at present hampered by a large diversity in study design and inconsistent findings.

In the discussion, we highlight some pitfalls and opportunities for future research:

We hope that our overview of current studies and recommendations for future research will help to determine the efficacy of tES for enhancing attention.